On Friday, March 1st, 2013 we met with my amazing midwife, Marsha Jackson, for my 39 week appointment. I was 3cm dilated and we decided to strip my membranes and try castor oil since we were anticipating a large baby. I had regular contractions all day Friday but they were really wimpy.

On Saturday, March 2nd, I tried two miserable doses of castor oil. Our friends, The Patricks, came over Saturday night to play board games and distract me. I sincerely felt like the baby would never come.

To try to start labor on Sunday, I had cervadil inserted at 10:30am and Marsha stripped my membranes again. We went for a walk in Old Town and had spicy Thai for lunch. Then we went home and I took it easy for a couple hours. I took a 30minute nap (I wish it had been longer) at 4:30pm. Around 5:30, I looked up at John full of dejection. “It’s not going to happen, is it?”

Being a great husband coach trained in the Bradley Method he said, “Get up! We’re going to get this show on the road!”

We did 10 deep squats together and then we went for a walk. I feel like the squats and walk finally kicked things off because a few steps outside the front door, I had my first REAL contraction!

John was an intrepid coach timing ALL of my contractions until we decided to break my waters at 4:30am when things got a lot more intense. From about 5:45pm when labor began until 4:30am, my contractions were consistently and exactly three minutes apart. John was wholly focused on me so much so that the one time he took a break to eat, it startled me and I chastised him as he re-entered the room eating a chocolate chip cookie. He froze and put the cookie down on his nightstand (I would later eat that cookie almost immediately after Q was born).

We broke my waters at 4:30am. I was only at 5cm after 10.5 hours of active labor. I had started off Sunday morning at 4cm. We knew I had a lot of fluid and that was preventing the baby's head from putting the necessary pressure on my cervix so we went ahead and broke my waters. I puked about an hour later at 5:30am and thought I was in transition but the midwives say that didn't really happen until 7am. I loved being able to move freely around the room and tried lots of positions in both the bedroom and bathroom. I started pushing around 7:45 until he was born at 11:32am (nearly FOUR hours). For me, pushing was the hardest part and I felt really unprepared for what it would feel like. Marsha and Gwen (the birth assistant) said I was tightening my leg and butt muscles when I needed to be relaxing those and just bearing down. It did not come to me naturally at all. He was so big, he crowned for nearly two hours and we pretty much had to do an episiotomy a little after 11am because I was losing steam. 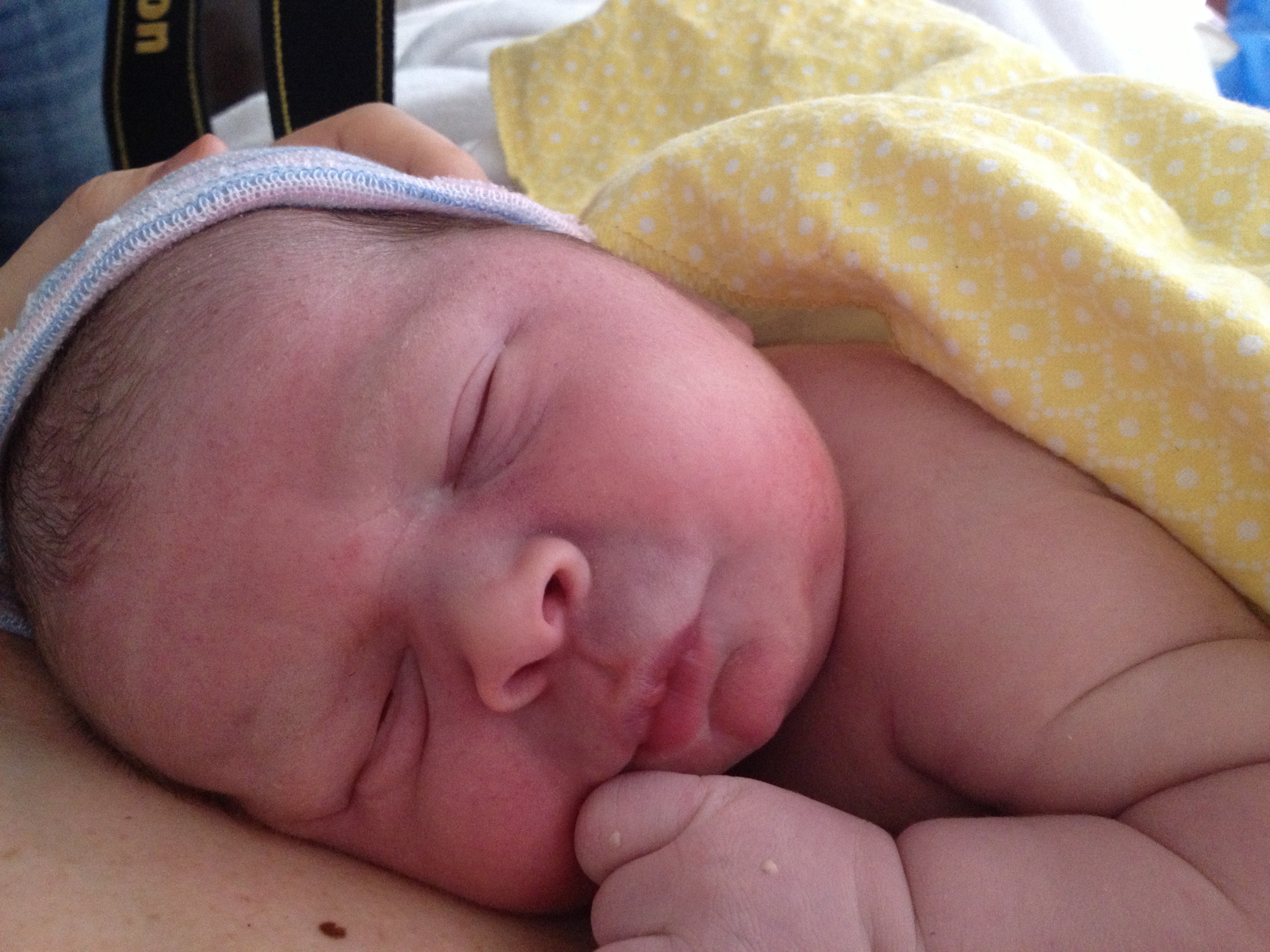 (picture taken immediately after birth. You would look puffy too if you had been crowning for TWO HOURS! Poor baby with the big noggin.)

The thing I will remember the most is that after I finally pushed his head out, it felt like I had a wild raccoon in my uterus he was flailing so much! We tried two positions (WITH HIS HEAD OUT) before settling on a third position, a runner’s lunge onto the edge of the bed. All labor, my contractions had been almost exactly three minutes apart, but there was a pause before that last push. It’s like my body knew this was the last push we needed. I remember saying with exasperation, "Where is the contraction!?” And then it and Quincy finally arrived.

Because he was so big, my midwife did do the Gaskin Maneuver during my last push to get the shoulders extracted. It only took that one last big push and he came out smoothly with Marsha’s expert hand.

My first words were "oh my god, he's a big baby!" He didn’t look like a newborn - he looked like a 3 month old! He weighed in at 10 pounds exactly, his head was 15.25" in diameter, and he was 21.5 inches long. He is a sturdy little guy who looks like and is built just like his daddy. I'm thankful he handled labor and delivery so well. His heart rate was solid the whole time which gave me courage throughout. It felt so good to have him in my arms at last. Well almost in my arms. His cord was actually so short (maybe 11 inches?) that I couldn’t get him on my chest/breast right away as I had envisioned, but I was so in awe of him it didn’t really matter.

After I delivered the placenta (EASY after a 10# baby), I told John to feed our midwives lunch, and I was alone with Quincy. It was a magical time for just Quincy and me for about five minutes before I regretted sending everyone away. I was covered in sweat and blood! John arrived shortly with a margarita. That helped.

It was amazing to me that I was more discomfited by my bodily fluids than by any pain. The high of natural birth is very real! 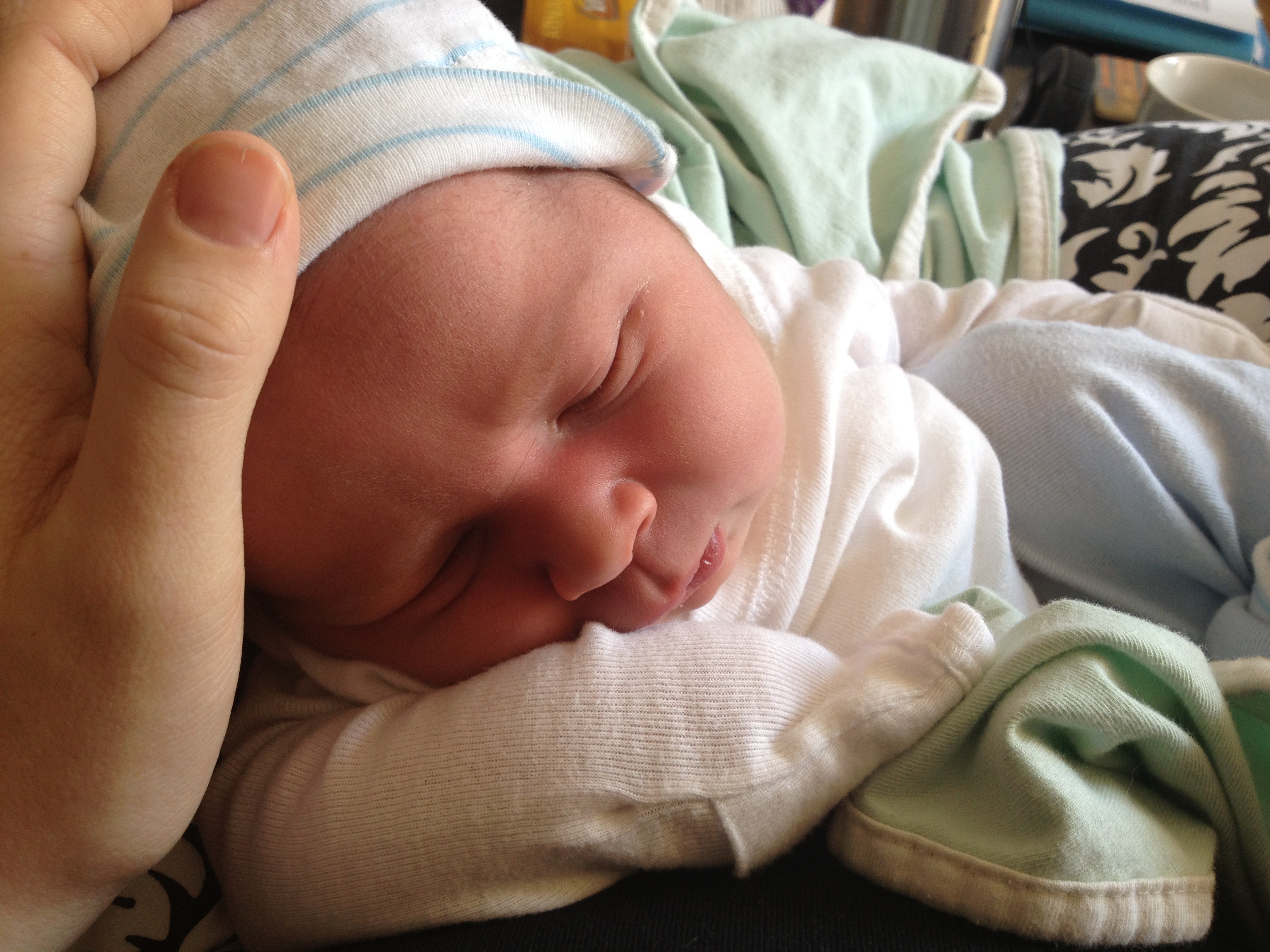