1am Thursday, October 27th two days after my due date, I awoke to regular contractions about five minutes apart. They weren’t super strong, but regular and strong enough that I couldn’t sleep so I dared excitement.

As John slept beside me and I debated how to pass the time, I realized we had never checked to see when Theodore Roosevelt’s birthday was – one of our two namesakes for our baby girl. A quick visit to Wikipedia revealed that his birthday was none other than October 27th!

My baby’s response a la Cher Horowitz, “AS IF!”

A few hours passed and I had the unsettling conviction that the baby was not head down…again.

She had been head down at my 36 week appointment but at 39 weeks Thursday, October 20th she had been transverse, i.e. SIDEWAYS. My ob ordered an ultrasound the day after my appointment during which we discovered she had rotated overnight…180 degrees and was now transverse the other direction! The ultrasound tech also estimated an 11 pound baby. My ob was gobsmacked – it was very unusual for a baby of that size to be able to do such gymnastics in utero. The size did not intimidate me – I grow big babies and had successfully birthed healthy 10 pound and 10.5 pound babies vaginally without drugs. But a transverse lying baby is a one-way ticket to the OR.

What could we do, I had asked? He said to try all my baby spinning techniques at home over the weekend and that he would attempt an ECV to turn the baby on Monday, October 24th.

Now to go into labor before she turned again!

So the morning of Thursday, October 27th I knew she was transverse again. I woke up John and we called my ob who told us to meet him at the hospital so we could turn her before my labor progressed further.

I was right. She was all woppyjawed again.

My doctor decided to see if he could unofficially “nudge” her back into position at 7am. The “nudging” was not fun and made worse by an aggressive labor and delivery nurse who obviously had not read my birth plan or history and insisted on coaching me loudly. I shot John a death glare to shut her the hell up. John being the considerate gentleman that he is abjured admonishing the nurse but instead just coached over her. Somehow through the cacophony, the doctor was able to turn the baby head down.

Then he turned to me and said, “Whitney, you know you have to go home to labor since your contractions aren’t strong enough and you are only 1 cm dilated.”

I knew it was necessary but I dreaded the discharge paperwork and the uncomfortable car ride home. I’m glad we went in to get her back head down, but I was daunted. The hospital trip took a lot of energy and I had only slept 3 hours the night before.

My ob also told me, “Whitney, once things are really going, you’re going to have to let me break your waters so the baby’s head engages and she stays head down.”

That was the one intervention that I had done before that I was trying to avoid this time – which is why he was so adamant – I prayed it wouldn’t come to that.

The prodermal labor continued throughout Thursday and all day Friday. Strong enough that I only slept one or two disjointed hours, but not strong enough to really move the ball forward.

Obviously I was emotionally and physically exhausted and praying fervently for things to pick up soon while I still had the stamina for it.

Finally, Friday October 28th at 8pm as the sun set, I got my first REAL contraction and another rush of energy.

I got down to business. I bounced on my birthing ball, used aromatherapy, and watched a three minute National Geographic video of flowers blossoming in rapid time lapse over and over again willing my own cervix to do the same.

I did this for FOUR hours. 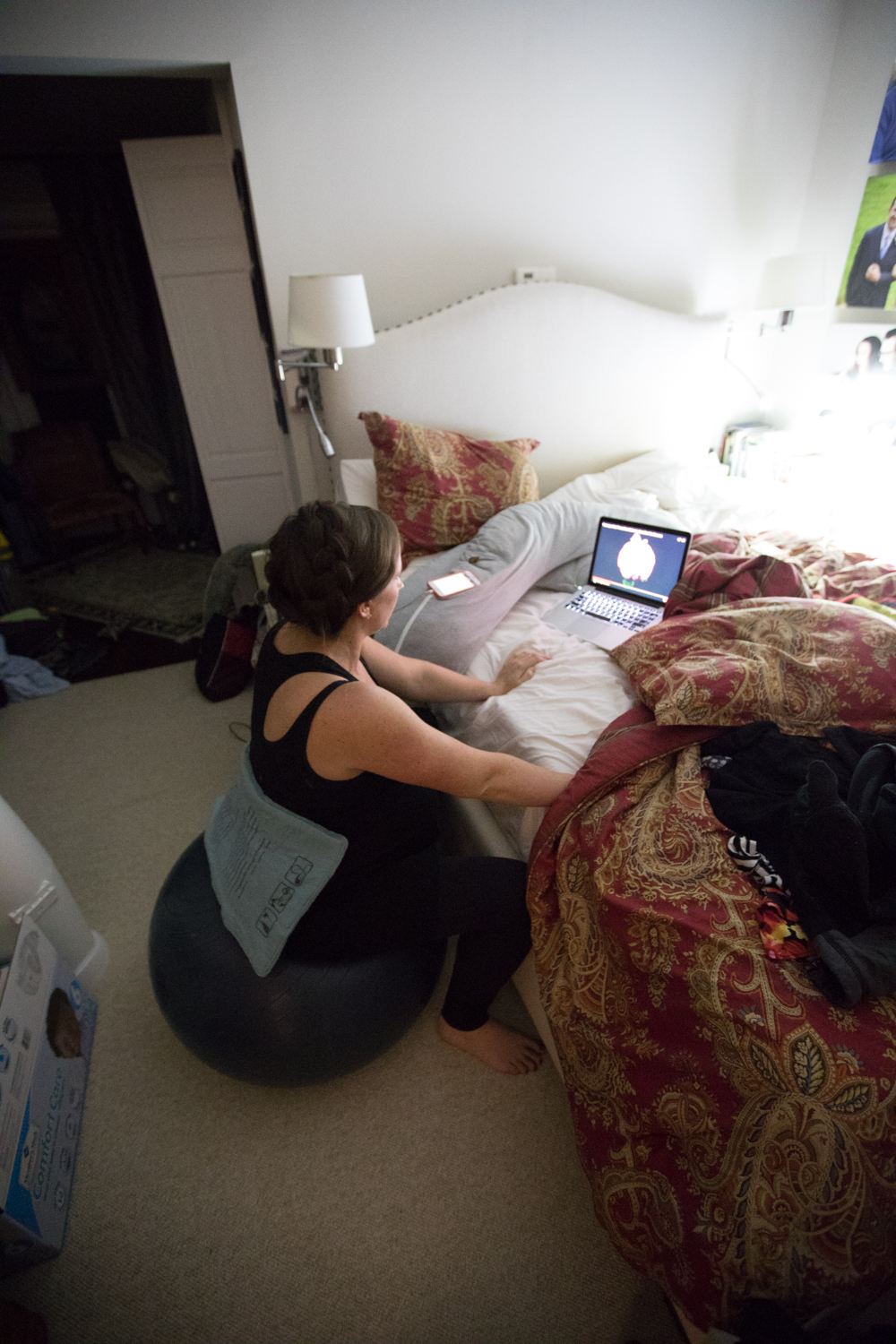 Around midnight, my legs started to shake and John and I decided to make the call and go to the hospital. The contractions weren’t overwhelming me yet, but had been 4 minutes apart since 8pm. We thought I might be transitioning.

In hindsight, I was trembling from exhaustion. 43 hours of prodermal labor and 4 hours of active labor on five hours of sleep was just too much.

We got to the hospital around 1:30am on Saturday, October 29th and I was 4cm dilated, fully effaced, and the baby had dropped to -1 station. My doctor still wanted to break my waters to make sure baby girl didn’t do another circus trick. I asked if that was necessary since she had dropped and he insisted it was my best bet for a vaginal delivery.

We rolled the dice and broke my waters.

And then my labor stopped.

My doctor was flummoxed and called my uterus “lazy.”

For six hours, John, my dear friend Karen who acted as our doula, and I tried all the tricks in the book we could to get things going again.

At 8am, my doctor came back in and told me what I dreaded and knew was coming. I had to start Pitocin. The clock was ticking since my water was broken and I was obviously operating on fumes since I had had so little sleep.

The first four hours on Pitocin weren’t so bad. They started me on the lowest dose and upped it every 30-45 minutes once they were confident that the baby and I were handling the drug ok. I do think my doctor was kind of maniacal because he would visit and be telling jokes or making small talk and just randomly up my Pitocin drip with a couple pushes of a button. I would wince.

I maxed out on the Pitocin around 1pm and then the torture really began.

For me, natural contractions feel like you’re gently blowing up a balloon and then letting the air out. I would describe them as hard work – i.e. labor – and uncomfortable, but not painful. Artificially induced contractions felt like someone picked me up by my feet and slammed me stomach first against a wall and I couldn’t catch my breathe for 45 seconds and then the contraction would taper off more normally. They were violent contractions that came every 2.5 minutes which meant I had a mere 30 seconds to try and regain my composure in between each contraction.

To add to my discomfort, Pitocin requires constant electronic fetal monitoring which is a belt around my pregnant belly to measure contractions and the baby’s heart rate. Baby girl kept moving in between contractions so the nurse would come in and have to hold the sensor in place to get a reading. Every time they did this, the baby was fine, but inevitably they would come in every 10-15 minutes because the monitor couldn’t read the baby. Around 4pm the nurse told me that they wanted to do an internal fetal monitor which would require screwing into my baby’s skull in order to get a steady reading. I said I didn’t give a crap about their reading. All of my health stats and the baby’s health stats were good. Their constant fussing was just getting in the way of me laboring in peace.

The nurse backed out of the room carefully and said she would call my doctor.

My doctor arrived around 5pm to placate the nurses but he knew I wasn’t going to give into the internal monitor. He talked me into a vaginal exam to see where things were.

Thank the Lord and baby Jesus I was 8 cm and could then see the light at the end of the tunnel. The doctor said I would have the baby soon so the internal monitor was a moot point.

It was still hard and I had to take each contraction one at a time. For the last hour, I think I shrieked John’s full name like an expletive every time a contraction began. I would dig my nails into his arm and call out “John Michael Paul Athayde”! My poor husband. Through three labors, this is the closest I ever got to cursing at him though!

At 6pm, I very suddenly had the overwhelming urge to push. I called for the nurse to get the doctor and then had to look up at the ceiling and sing to fight the urge to bear down with all my might.

I bore through 2 or 3 contractions like this swearing the baby was coming. As soon as I saw the doctor walk in the door, I let it all go and Theodora Laine Athayde was born in one concerted push at 6:15pm on Saturday, October 29th. Theodora after Teddy Roosevelt and Laine after my late mother.

As the doctor lifted her up, I thought she was long and lean like a string of spaghetti and I noticed she had long fingers and even long fingernails as they rested her on my chest.

She was indeed long at 22.5” (a full inch longer than her brothers were at birth) but only a ‘dainty’ 9 pounds and 11 ounces. It felt so good to finally hold her. The doctor then gave me the good news that no stitches were needed – praise God!

Because she was born just before the 7pm shift change and because my doctor was concerned about my “lazy uterus” shrinking quickly back to size, some unpleasant chaos ensued but I got to hold her the whole time and I felt so relieved to be off the Pitocin roller coaster from hell that I didn’t care. 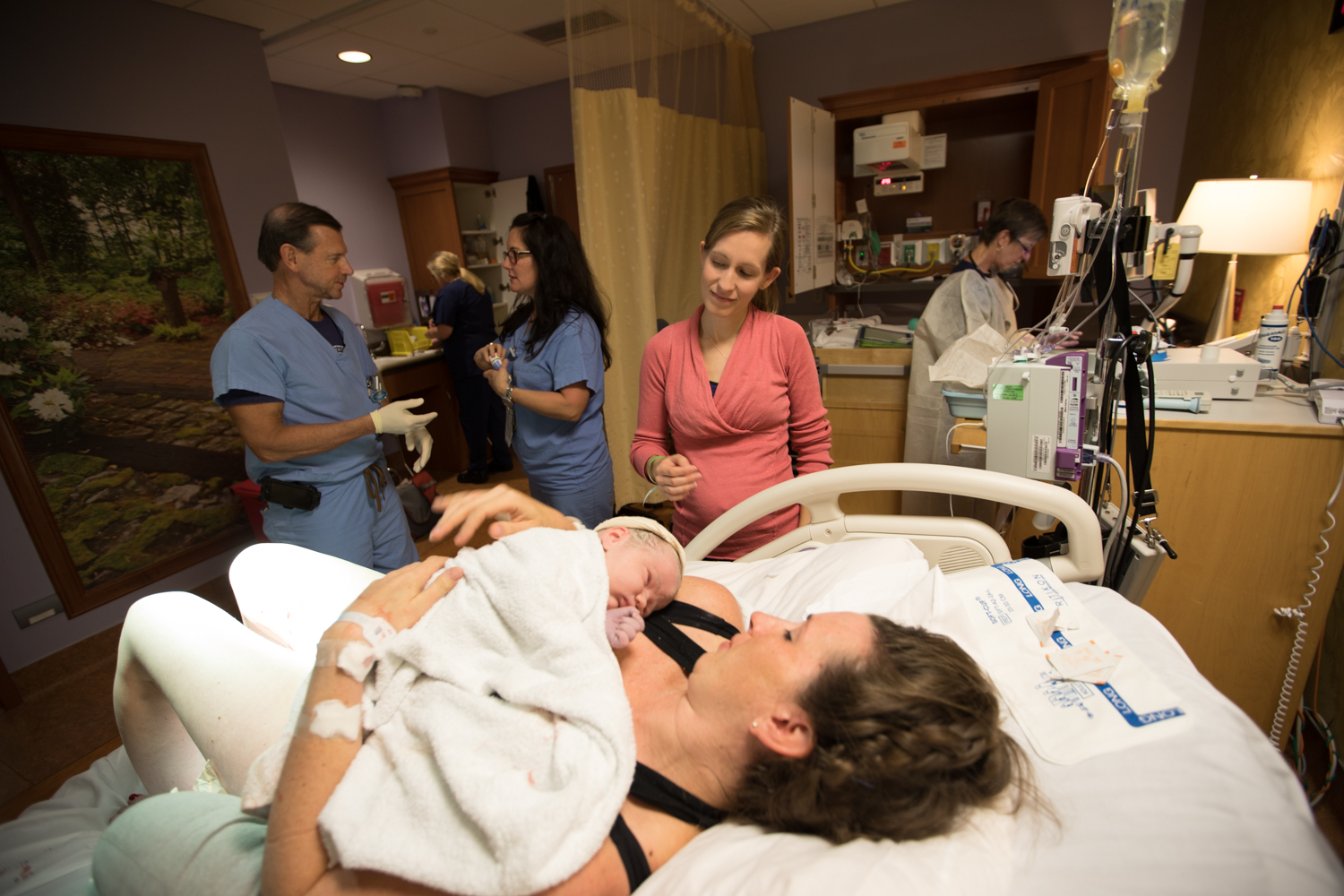 For a long while I was really mad at myself for 1) going into the hospital too soon (the second time) and 2) agreeing to have my waters broken, but God has given me the peace that this was how my daughter was to be born. I wouldn’t wish Pitocin on my worst enemy but now I can tell my Bradley students the difference between a natural contraction and a Pitocin contraction. Just before my doctor did the vaginal exam at 5pm and told me I was 8cm, I was about to ask for the epidural. ME. Crunchy natural Bradley instructor Whitney was going to ask for the epidural because the pain was that bad. I have a lot of empathy for women who are induced and then get the epidural. I get it now.

This is definitely a story I'll never let baby girl live down. The funny thing is that until the last month or so, Teddy had a strong preference for being rocked and held horizontally just like she was in the womb. Overall, despite being my hardest labor, she has been my easiest baby. She definitely has her opinions but she is a very happy, easy going baby and we are lucky to have her. 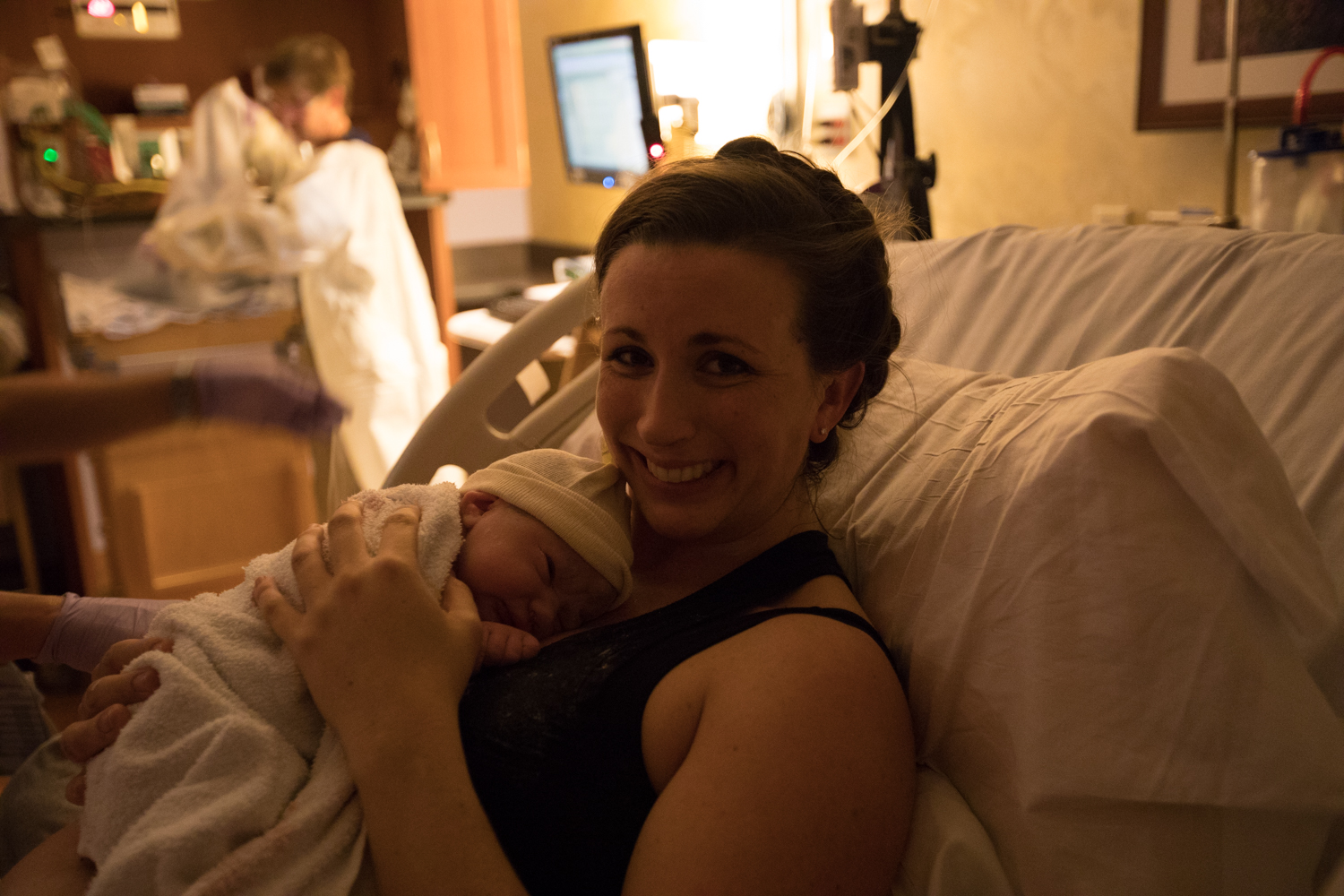 Postscript: I'm pretty proud of throwing this Wizard of Oz theme together on the day we came home from the hospital aka Halloween! I knew I wanted a lion, a tiger, and a bear (OH MY!) but at the last second I braided my hair, threw on John's blue gingham shirt, and some red shoes so I could be on theme as Dorothy. 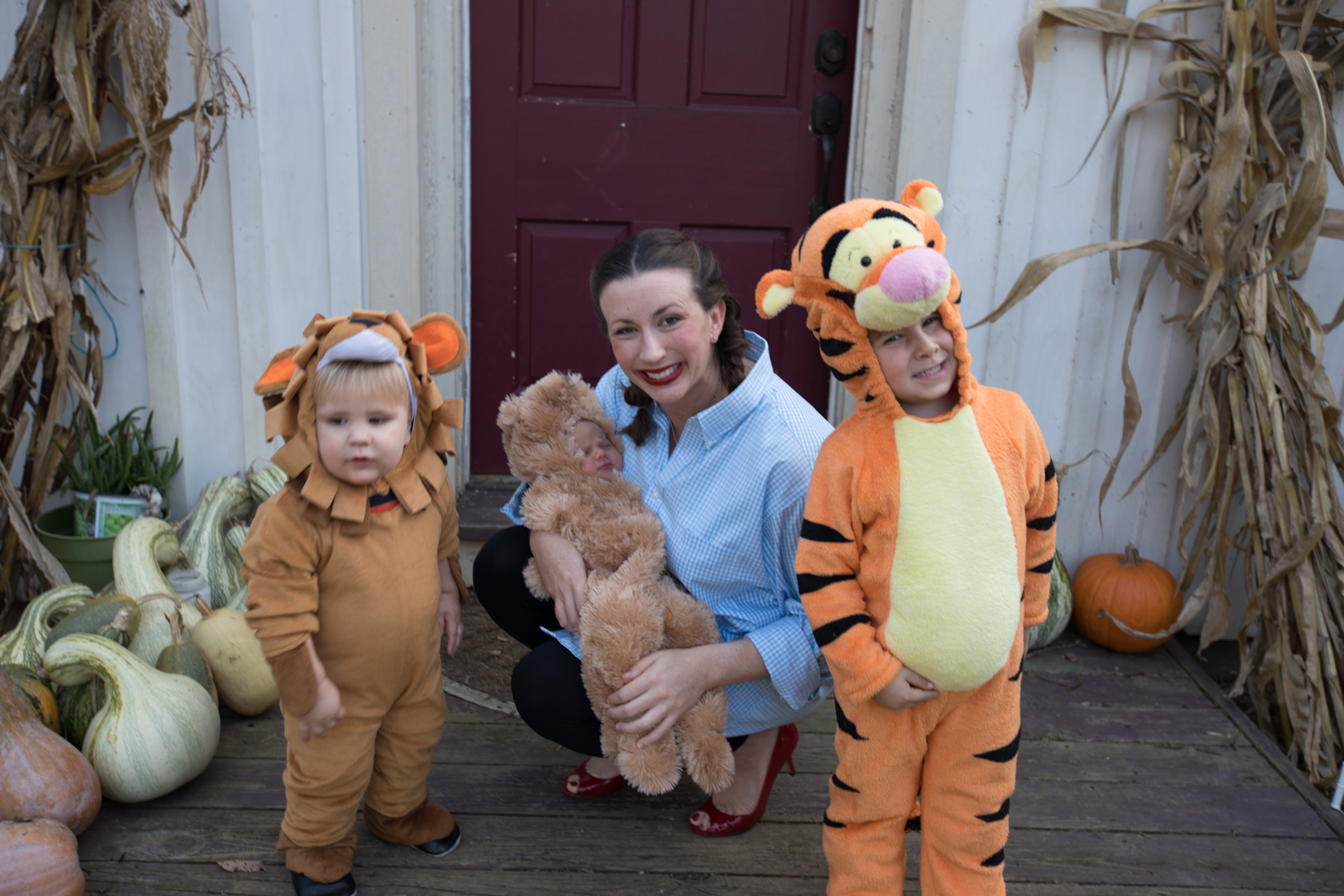 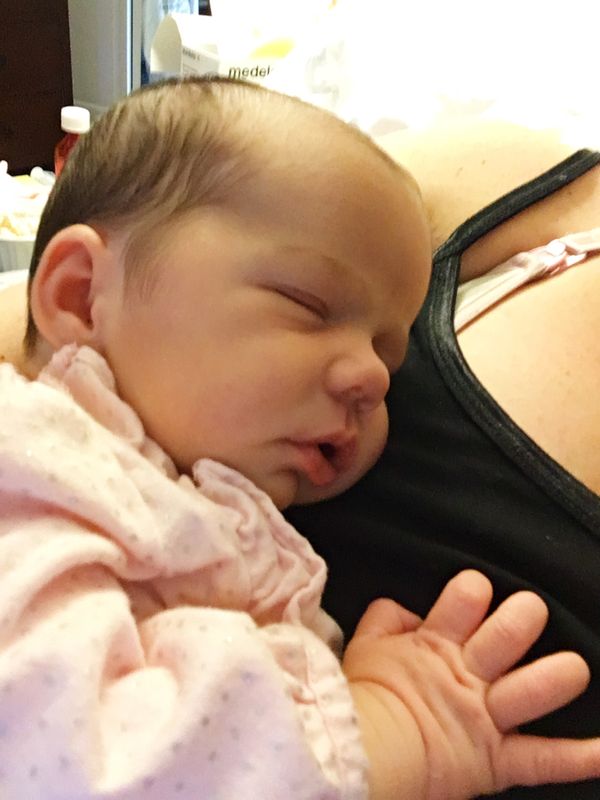 Teddy last nursed two weeks ago. Even just typing that sentence makes me emotional! I am definitely still in hormonal limbo so bear with me if I come across as 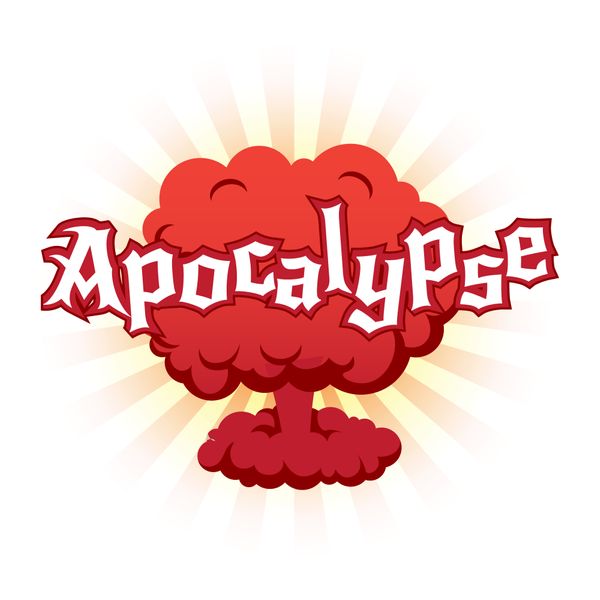 Recently, some friends who are new homeowners asked us about the basics of being prepared. Here's their primary question: Now that we're semi-normal people who actually live in a house,